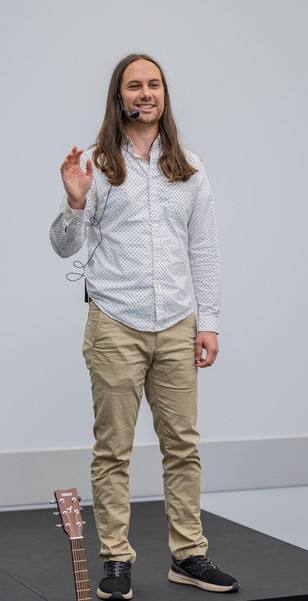 Not too long ago I was in Anaheim to speak at the Anaheim Mindfulness Expo. We’ve been taking the business on the road recently. We sell the meditation products in a booth and then I’ll offer a talk to the festival attendees as well. As we walked into the Anaheim Convention Center the energy seemed very different than what I expected. We wandered around a few of the great halls for a while trying to figure out where to go. It didn’t seem like a mindfulness expo at all. I was tuning in to the energy of the people there and I could tell that they would not resonate with anything I had to say about meditation and spiritual truths. What had I gotten myself into here? I began to wonder if the whole trip had been in vain. I began to notice as we walked that there were many different types of slot machines and various other types of entertainment and gambling related things there, and it slowly began to dawn on me that we had inadvertently wandered into some sort of casino convention! We had entered through the back vendor's entrance so we had missed all the signage that they had out front. We looked again at our instructions and noticed the key direction that we had previously overlooked - we were supposed to be on the second floor.

We made our way upstairs and soon found the correct rooms for us to set up our booth in. Upon entering the correct room, I noticed another vendor setting up their booth and my immediate thought was “Oh, there’s my people!” The thought surprised me considering that I didn’t know those people, but also it was interesting to notice that the whole vibration of the room was different from the convention downstairs.

I reflected a lot on that moment and tried to tune in to exactly what made it so different from the experience at the gambling convention downstairs. I realized that it was a wonderful illustration about the power of energy and consciousness. Where we put our energy and focus creates waves of vibrations and magnetism. More than we may realize, when we interact with others, we’re responding to their energy and consciousness, not just their physical body or the words they say. In the casino convention the energy was all about how to get people to spend more money at their casinos. The energy was entirely on outward pleasures and addictive gambling.

The contrast was immediately palpable when we made our way upstairs. Those first people I saw upstairs in the Mindfulness Expo it turns out were selling yoga clothes they had very creatively designed. As I reflected on it later, the thing that made them feel like they were “my people” was that they were tuning in to something deeper of themselves and finding something of what they were looking for inside. Maybe they simply enjoy the feeling after a good yoga class, but that feeling itself emanates from their own center, deep within.

Every thought and action has behind it a direction of energy that creates a certain flow of magnetism. I reflected that the difference of the two magnetisms that I noticed that day could be boiled down to the simple question: What are you seeking? Are you seeking your happiness in things of this world that glitter and shout for your attention, or are you finding your fulfillment inside yourself, in the stillness of your own soul?

Subscribe to our newsletter to receive updates from MeditationBench.com